There has been a flurry of signings in the last week or so at Kingfield as new Cards boss Anthony Limbrick builds his squad for the coming season. But what has happened to the players that ended last season at Kingfield and who might still be signing for The Cards? We take a look at who has gone where so far –

In the football league

Gozie Ugwu – 21 goals in all competitions was enough to attract relegated Chesterfield to Garry Hill’s player of the season as they look to secure an immediate return to League One. Ugwu signed a two year deal with the club.

Terell Thomas – Thomas was released from League One side Charlton at the end of the season and despite Limbrick saying he wanted to build a team around a player like Thomas, he couldn’t secure his services. The exciting youngster instead could be lining up against his old side after he signed for Wigan Athletic, who were relegated from The Championship last season. After signing for Paul Cook’s side, he thanked Cards fans for their support. 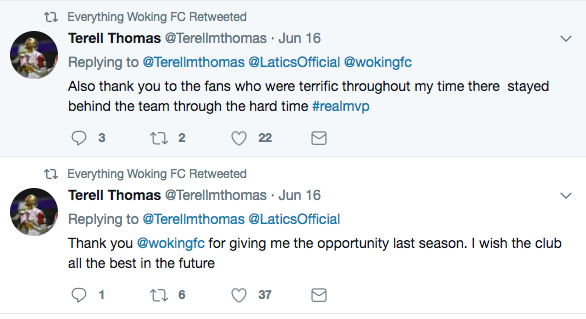 Elsewhere in the National League

Keiran Murtagh – Cards fans were hopeful their player of the season would be amongst the players staying at Kingfield. However, he will instead be playing against Woking next season after signing a two-year deal at Boreham Wood. Like Thomas, Murtagh also took to social media to thank the Woking fans.

Delano Sam-Yorke – The dust had barely settled on Woking’s survival when it was announced that Sam-Yorke had signed for Maidstone United. This was no surprise after a successful loan spell at the club last season.

In the leagues below

Chike Kandi – After failing to break into Woking’s team last season, Kandi was released and was quickly snapped up by  Isthmian League Premier Division side Leatherhead. The Tanners are without celeb manager Jimmy Bullard after he left the club but look to be ambitious after also signing Jack Midson.

Max Kretzschmar – Despite scoring some big goals for Woking, including the winner vs Dover and the opener against Dagenham & Redbridge on the last day of the season, the 23-year-old was released. He has joined Hampton & Richmond on a one-year deal and will be looking to help them build on last season’s impressive league campaign which saw them make the National League South play-offs.

Aaron Smith-Joseph – Academy graduate Smith-Joseph only played once for Garry Hill’s side last season – turning out as a sub vs Walton Casuals. The youngster has signed for Burgess Hill Town and could come up against Kandi as the West Sussex team play in the same league as Leatherhead.

Jamie Lucas – The Bristol Rovers loanee was released at the end of the season and made the short trip to join National League South side Bath City. Lucas scored two league goals for Woking including a penalty during an away draw at Barrow.

Yet to hear from

Brandon Hall – Although Hall spent a lot of last season on the bench, he was not one of the players released and it is expected that Woking are in talks with him to retain his services. He recently spent time at Jamie Vardy’s V9 Academy, aimed at improving non-league talent, and tweeted his excitement at taking part.

Jake Caprice – Although he was in and out of the team last season, Caprice has another impressive season at Kingfield. Caprice is yet to commit to Woking or find a new club. The majority of Cards fans will hope he is part of Limbrick’s new-look squad next season.

All photos by David Homes and can be found at wokingfc.co.uk