Woking today confirmed that they have re-signed forward Gavin McCallum after an impressive pre-season and Gavin Williams who was a free agent after leaving newly promoted Yeovil Town at the end of last season.

Cards fans will know all about McCallum after he spent last season at Kingfield but what can we expect from the new signing? Williams signed for Bristol City in 2008 and 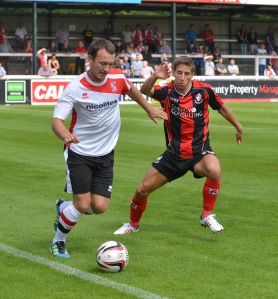 spent two and a half years at Ashton Gate, so we talked to Robins fan Liam Horler (@Liam_Horler) to find out more on Woking’s new forward.

Q. What position/positions did he play for Bristol City?

Gavin was often deployed on the right hand side of midfield for Bristol City, this was one of the reasons why he didn’t have perhaps the impact on the team that he could have had he been played in a different position. The times that he played as a central-attacking midfielder in a midfield of five was when he was at his best. But because then manager, Gary Johnson was keen to play two strikers and a midfield four, Gavin would often find himself on the bench, rather than played as one of the two central midfielders, mainly because Johnson didn’t trust his tackling ability, which is crucial in a midfield two the Championship.

Q. What are his strengths and weaknesses?

Williams’ main strengths are his dribbling ability and ball control. He often used to skip through two or three players in a central position in the opposition half with what seemed like ease. He’s also known to like a shot on goal. Don’t be disheartened by the fact he only scored three goals for City (most of his 52 appearances came as a substitute). A 30 yard volley against Derby County at Pride Park right in front of the City fans sticks in my mind but if you’d ask most Robins fans “Which Gavin Williams goal do you remember the most?” They would no doubt say his last minute equaliser against Cardiff City in the FA Cup (for different reasons!) He is also a terrific passer of the ball.

I’d say Williams had two weaknesses during his time that I watched him at Ashton Gate. Firstly his lack of pace hindered him a little bit in a very quick league but this might not be as much of an issue making the step down to the conference. Secondly he is a little bit ‘light weight’ and used to get shrugged off of the ball sometimes but when in a free role between the midfield and strikers this wasn’t too much of a problem. Another thing which stuck out for me whilst watching Williams was that he is very much a confidence player. When he’s happy with his game and the team are winning he was a joy to watch (he linked up very well with Lee Trundle whilst the two were together at the club) but when the team are on the back foot he does have the tendency to go missing somewhat.

Q. Will he be remembered as a player who never fulfilled his potential with yourselves due to injuries?

Yes, I couldn’t have put it better myself! His injuries along with Gary Johnson not really being able to put him in his best position were the only thing that stopped him fulfilling his potential with City, he no doubt had the talent.

Q. Bearing in mind he has dropped down into non-league, do you think he could be a stand out player?

I’ll be honest in saying I haven’t watched too much Conference football and I obviously haven’t seen Williams play since 2010, when he was 29 years of age. But I wouldn’t have thought he would have lost too much of his ‘spark’ in three years. If Gavin stays injury-free and keeps his confidence high I have no doubt that he will be one of the stand out players not just for Woking but in the whole league.

Q. Not many players go from City to Rovers, was this a move that disappointed you and other fans?

Not many players swap Bristol allegiances without playing for a few clubs before but Gavin was one that did that. This didn’t disappoint me as much as it would have if Bristol Rovers were in the same division as City and if he’d left us for what he thought was a better challenge. He was released by us, because Gary Johnson decided to spend some money to bring in what he thought were better players, this left Gavin surplus to requirements and the fact that he was released rather than officially transferred from us to them made the blow a little softer. Gavin is also a nice man and very professional player who works hard for the team, bear in mind that he’s a Cardiff City fan and obviously joined Bristol Rovers so for Bristol City fans to respect him shows he put in a lot of effort for the shirt. If Gavin Williams came back to Ashton Gate in an opposition shirt (Woking against Bristol City in the FA Cup first round this season? You never know), he would certainly not be jeered; in fact he’d probably get a very good reception.

I shall look out for how Gavin gets on this season; you’ve got yourselves a very talented player.